THE HISTORY OF SCREEN PRINTING

Screen printing, silkscreening, or serigraphy is a printmaking technique that creates a sharp-edged image using a stencil. A screen print or serigraph is an image created using this technique.

It began as an industrial technology, and was then adopted by American graphic art well before the 1900s. It is currently popular both in fine arts and in commercial printing, where it is commonly used to print images on t-shirts, caps, CDs & DVDs, ceramics, glass, polyethylene, polypropylene, paper, metals, and wood. The Printer's National Environmental Assistance Center says "Screen printing is arguably the most versatile of all printing processes". Since rudimentary screen printing materials are so affordable and readily available, it has been used frequently in underground settings and subcultures, and the non-professional look of such DIY culture screen prints have become a significant cultural aesthetic seen on movie posters, record album covers, flyers, shirts, commercial fonts in advertising, and elsewhere.

Graphic screen printing is widely used today to create many mass or large batch produced graphics, such as posters or display stands. Full colour prints can be created by printing in CMYK (cyan, magenta, yellow and black). Screen printing is often preferred over other processes such as dye sublimation or inkjet printing because of its low cost and ability to print on many types of media.

A screen is made of a piece of porous, finely woven fabric (originally silk, but typically made of polyester since the 1940s) stretched over a frame of aluminum or wood. Areas of the screen are blocked off with a non-permeable material to form a stencil, which is a negative of the image to be printed; that is, the open spaces are where the ink will appear.

There are three types of screen printing presses. The 'flat-bed' (probably the most widely used), 'cylinder', and 'rotary'.

Textile items are printed in multi-colour designs using a wet on wet technique, while graphic items are allowed to dry between colours that are then printed with another screen and often in a different colour.

The screen can be re-used after cleaning. However if the design is no longer needed, then the screen can be "reclaimed", that is cleared of all emulsion and used again. The reclaiming process involves removing the ink from the screen then spraying on stencil remover to remove all emulsion. Stencil removers come in the form of liquids, gels, or powders. The powdered types have to be mixed with water before use, and so can be considered to belong to the liquid category. After applying the stencil remover the emulsion must be washed out using a pressure washer.

Most screens are ready for re-coating at this stage, but sometimes screens will have to undergo a further step in the reclaiming process called de-hazing. This additional step removes haze or "ghost images" left behind in the screen once the emulsion has been removed. Ghost images tend to faintly outline the open areas of previous stencils, hence the name. They are the result of ink residue trapped in the mesh, often in the knuckles of the mesh, those points where threads overlap.

While the public thinks of garments in conjunction with screen printing, the technique is used on tens of thousands of items, decals, clock and watch faces, and many more products. The technique has even been adapted for more advanced uses, such as laying down conductors and resistors in multi-layer circuits using thin ceramic layers as the substrate. 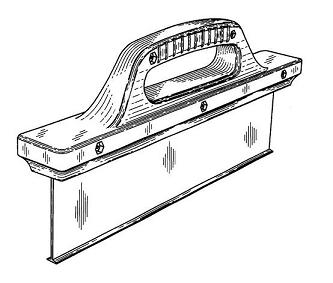 There are several ways to create a stencil for screen printing. An early method was to create it by hand in the desired shape, either by cutting the design from a non-porous material and attaching it to the bottom of the screen, or by painting a negative image directly on the screen with a filler material which became impermeable when it dried. For a more painterly technique, the artist would choose to paint the image with drawing fluid, wait for the image to dry, and then coat the entire screen with screen filler. After the filler had dried, water was used to spray out the screen, and only the areas that were painted by the drawing fluid would wash away, leaving a stencil around it. This process enabled the artist to incorporate their hand into the process, to stay true to their drawing.

A method that has increased in popularity over the past 70 years and is tremendously popular is the photo emulsion technique:

Photographic screens can reproduce images with a high level of detail, and can be reused for tens of thousands of copies. The ease of producing transparent overlays from any black-and-white image makes this the most convenient method for artists who are not familiar with other printmaking techniques. Artists can obtain screens, frames, emulsion, and lights separately; there are also preassembled kits, which are especially popular for printing small items such as greeting cards.

Plastisol:  The most common plastisol based print used in garment decoration. Good colour opacity onto dark garments and clear graphic detail with, as the name suggests, a more plasticized texture. This print can be made softer with special additives or heavier by adding extra layers of ink. Most plastisol inks require heat (approx. 300 degrees fahrenheit for many inks) to cure the print.

Water-Based Inks:  These penetrate the fabric more than the plastisol inks and create a much softer feel. Ideal for printing darker inks onto lighter coloured garments. Also useful for larger area prints where texture is important.

PVC/ Phalate Free:  Relatively new breed of ink and printing with the benefits of plastisol but without the two main toxic components - soft feeling print.

Discharge Inks:  Used to print lighter colours onto dark background fabrics, they work by removing the dye in the garment – this means they leave a much softer texture. They are less graphic in nature than plastisol inks, and exact colours are difficult to control, but especially good for distressed and vintage prints.

Foil:  Consists of a glue printed onto the fabric and then foil is applied for a mirror finish.

Glitter/Shimmer:  Silver flakes are suspended in a plastisol ink to create this sparkle effect. Usually available in gold or silver but can be mixed to make most colours.

Metallic:  Similar to glitter, but smaller particles suspended in the ink. A glue is printed onto the fabric then a nanoscale fibres applied on it.

Expanding Ink (Puff): An additive to plastisol inks which raises the print off the garment, creating a 3D feel.

Caviar Beads:  Again a glue is printed in the shape of the design, to which small plastic beads are then applied – works well with solid block areas creating an interesting tactile surface.

Four Colour Process:  Artwork is created using dots (CMYK) which combine to create the full spectrum of colours needed for photographic prints – this means a large number of colours can be printed using only 4 screens, making the set-up costs viable. The inks are required to blend and are more translucent, meaning a compromise with vibrancy of colour.

Gloss:  A clear base laid over plastisol inks to create a shiny finish.

Nylobond:  A special ink additive for printing onto technical or waterproof fabrics.

Mirrored Silver:  Another solvent based ink but you can almost see your face in it.

Suede Ink:  Suede is another great ink that is easy to print and gives the image a textured leather, simulated suede look and feel. Suede is a milky coloured additive (much like a plastisol base) that will work in a regular plastisol. It is actually a puff blowing agent that does not bubble as much as regular puff ink. With suede additive you can make any colour of plastisol have a suede feel. The directions vary from manufacturer to manufacturer, but generally you can add up to 50% suede additive to your normal plastisol.

Print Gocco:  Print Gocco is a Japanese commercially-produced home screen printing system. Masters are created with the use of flashbulbs to burn an image into the screen. Over one-third of Japanese households own a Print Gocco system.